NEW SERVICES FOR OUR GUESTS AND FOR THEIR SAFETY 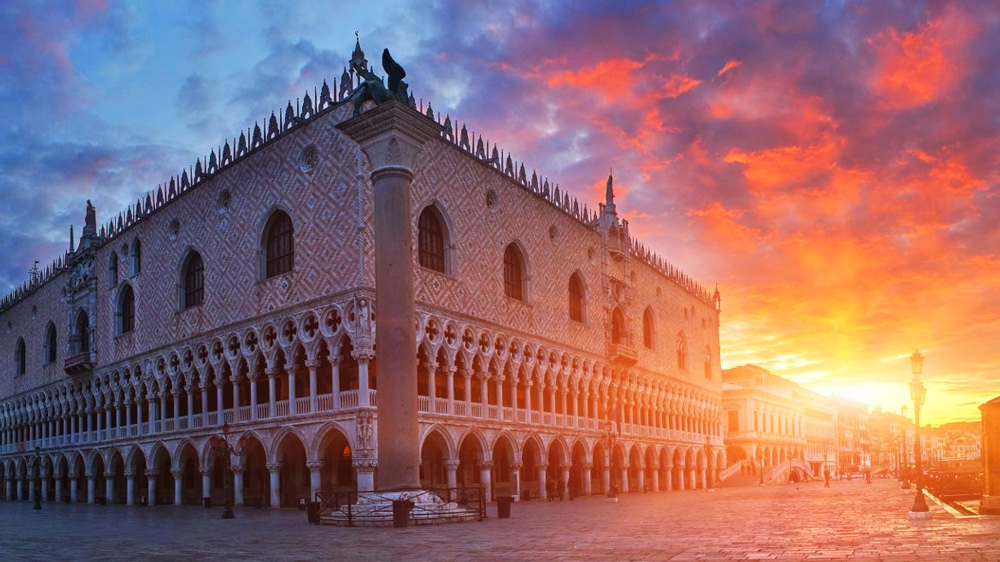 The Doge’s Palace in Venice: a tour of its most beautiful rooms

The Doge’s Palace in Venice is one of the most important attractions of the city. It’s incredibly beautiful from the outside, with its columns and gothic windows, but from the inside, it’s even better. Today we’ll have a virtual tour through the most important and impressive rooms of Doge’s Palace, discovering their function and paintings found inside. Before entering the palace, let’s start with one of its most impressive features – the so-called Golden Staircase.

The Golden Staircase now gives you access to the palace, but it hasn’t always been there. In fact, it was built in 1555, while Sansovino was reorganizing the buildings in St. Mark’s Square and the Doge’s Palace was also being renovated
You can guess why the Golden Staircase has this evocative name – in fact, the vault over the stairs is decorated with stucco and gold.
After climbing this enchanting staircase, you will enter  to the Sala dello Scudo, the first room of the Doge’s apartments.

The rooms we can visit today are those built in 1483, after the terrible fire that destroyed many parts of the Doge’s Palace. Unfortunately, none of the rooms still has the original furniture, since the Venetian Doges had to bring their own here once elected, and after their death, their relatives had the right to take it back.
However, the ceilings are still there, as well as the beautifully decorated fireplaces.
As we said before, the Sala dello Scudo is the first room you see in the Doge’s apartments. The Doge had his meetings and private consultations here, and sometimes banquets were organized in this room, where the coat of arms of the Doge’s family was exhibited.

You’ve probably already heard about this room since it’s the largest one in the whole of Europe. It’s 53 meters long and 25 meters wide, and it was designated to host the meetings of the most important magistrature of the Venetian state: the Maggior Consiglio (Great Council).
In 1577, a fire damaged it together with the Sala dello Scrutinio, this is why now it is decorated with paintings by Tintoretto, Palma il Giovane, and Paolo Veronese.
We recommend spending  a moment in this room to admire the longest canvas painting in the world, the Paradiso by Tintoretto, behind the Doge’s throne, that replaced Guariento’s painting lost in the fire.

“Sala del Senato” is not the only name of this room, in fact, it was also called Sala dei Pregadi, because the Doge used to ask the members of the Senate (Pregadi) to take part in council meetings. Tintoretto decorated this room too, with many artworks representing Christ, maybe to evocate the fact that the Senate was protected by the Sun of God since it was the authority in charge to elect the Doge.
In this room, there are also some paintings of Jacopo Palma il Giovane, about the history of the Venice Republic.

This is just a small part of what you will actually see inside the Doge’s Palace in Venice. The palace is a symbol of Venetian political power, but also it also represents the deep relationship between Venice and art. If you want to discover the most secret part of the Doge’s Palace, there’s a tour you can book on the official website: the Secret Itineraries Tour.